A History of Ball’s Cajun Foods

Ball’s Creole Seasoning Company is a monument to what the tireless efforts and limitless dedication of one man can achieve.  It is the realization of a dream.  Reginald McWilliams Ball, Sr. was the man who turned a large dream into an even larger reality.  That reality is Ball’s Creole Seasoning Company, one of the largest black owned processed seasoning manufacturers in the south.

Growing up in Winnfield, Louisiana, Mr. Ball’s father Joe Ball as he was called, wore many hats in order to support his family.  He was a gambler, bootlegger, barber, foot manicurist, and shoeshine boy. Whenever Earl K. Long then governor of the Longs of Louisiana came to town he would come by Joe Ball’s house for him to work on his feet.  His bodyguards would surround the house front and back and no one could enter until he had left.  He also once shined the shoes of the Infamous Clyde Barrow of Bonnie and Clyde fame.

Reginald Ball Sr. was born on April 19, 1918, in Winnfield, Louisiana.  At age 19 he married Evelyn Walker and, in 1941, moved to Lake Charles, Louisiana.  He began his life of work as an insurance salesman for Winnfield Burial Association and, at the same time, started to buy real estate with the idea of starting his own business.

However, his first major independent effort was a civic one.  Reginald opened and conducted the area’s first trade school aimed at training black veterans returning from World War II.  Using a building, which he had erected on Lake Charles’ north side, he played a major role in the development of craftsmanship and improved employment opportunities for black men.  By 1952 the demand for these services had diminished and Reginald turned his attention and talents to entertainment.  He converted the school into an auditorium where he staged dances and concerts.  During the nineteen fifties and sixties Ball’s Auditorium became a regional Mecca for top-notch black entertainment, and its marquee regularly headlined such talent as Ray Charles, Sam Cooke, Arthur Prysock, James Brown, Fats Domino, Ruth Brown, Jackie Wilson, Otis Redding and others.

Reginald also opened a night club, (The Pink Elephant) and a restaurant adjacent to the auditorium.  The restaurant soon became a major success, as he and Evelyn sold and increasingly popular dish of fried chicken seasoned with a special concoction of spices, which he mixed himself.  As demand for his special recipe chicken grew, he turned his hand to the development of additional spice mixtures for other menu items in his growing restaurant.  At the same time that he was enlarging his entrepreneurial base he was working for the Department of the Air Force at nearby Chennault Air Force Base as a supervisor of property accounting.  But beginning in 1958, when Chennault Air Force Base was closed, he focused his energies full-time on his burgeoning enterprise. Between 1960 and 1965 he refined both the taste and the production of his spicy fried chicken, and in September of 1968 was operating five fried chicken outlets in the Lake Charles area.  Initial efforts to expand more widely met with failure, but in 1976 in a joint venture with investors he opened additional outlets in Chicago, Detroit, Phoenix, Miami and Houston, Texas, under the title Creole Fried Chicken.

Within the next two years he removed himself entirely from the operational end of these efforts to devote all of his time to the production and marketing of his seasonings, particularly his chicken mix.  In 1977, with demand continuing to grow, Reginald formally launched his business Ball’s Creole Seasoning Company. 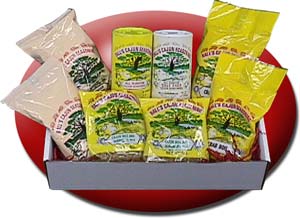 In the summer of 1979 Reginald suffered a heart attack and underwent emergency triple by-pass and artery transplant operations.  In spite of his weakened condition he continued to work toward his life-long goal of seeing his products become household items on supermarket shelves and in gourmet specialty outlets.

His family immediately picked up the banner, and under the leadership of his eldest son, Reginald Jr., continued to work to bring the dream to fruition.  Currently under the new name of Reggie Ball’s Cajun Foods Inc., is expanding its markets to include  the gigantic chain of Wal-Mart stores, H.E.B. Pantry, Kroger, Albertson’s supermarket chains, as well as Academy Sporting Goods Stores.  Additionally, negotiations are underway to penetrate other American markets, particularly on the west coast.

The best of lives are made of courage and dreams, a sage once said.  And so it was with Reginald McWilliam Ball. Sr.  His was a life lived fully, courageously, and with his dream always clearly in view.  His was the best of lives.

On March 9, 1999, Reginald Sr.’s widow, Evelyn, died of complications from lupus.  She will be warmly remembered for her contributions to the family business.

On May 27. 1999, Reggie Ball’s Cajun Foods, Inc. was a finalist for the Prestigious LANTERN Award, given by the Louisiana Board of Commerce and Industry and the Louisiana Department of Economic Development.  The awards provide statewide recognition for outstanding business and management practices, which lead to dramatic growth in the development and sale of a Louisiana product or service by a small or emerging Louisiana company.

At a ceremony at the Governor’s Mansion, Secretary of Economic Development, Kevin P. Reilly, cited Reggie Ball’s Cajun Foods for outstanding contributions to the Louisiana economy and to the Lake Charles community.  “It is inspiring to see a family-owned company increase its number of employees and expand its facilities.  A job well done, Mr. Ball.”

Powered by WordPress and WordPress Theme created with Artisteer.